For weeks now, Germany has debated the significance of the varied and seemingly incompatible factions that have descended on the capital to rally against the country’s coronavirus measures. From anti-vaxxers to biologists, Christian fundamentalists to conspiracy theorists, neo-Nazis to Hare Krishnas — could the forces gathered under the banner of coronavirus scepticism constitute a viable political force? Or are they just a passing symptom of the global pandemic?

Though few see any chance of these disparate strands forming a lasting movement, analysts warn that the threat the protests pose should not be discounted.

“The groups will crumble, but I don’t think this is what we have to look out for. We have to look out for people getting lost in alternative realities, in collective delusions,” said Miro Dittrich, a researcher on the far-right and social media at the Amadeu Antonio Foundation. “The longer this pandemic lasts, the more radical these people get. The longer they get radicalised, the more likely it is for them to use violence.”

Polls suggest that only 10 per cent of Germans believe the current measures — social distancing and mandatory wearing of masks in shops and on public transport — are too tough. Yet the protests against them have grown. On August 1, some 17,000 people protested in Berlin. By the end of the month, it was 38,000.

Where outsiders see an unstable and inchoate alliance of flower-crown wearing hippies and tattooed neo-Nazis, political scientists like Jan Rathje, also of the Amadeu Antonio institute, see some significant shared ideas — most notably, the belief in a natural order said to be threatened by modernity. Some rightwingers, for example, see environmental protection as integral to the defence of the German homeland. And one of the leaders of the attempt by hundreds of protesters on August 29 to storm the Reichstag was a dreadlocked woman identified as “Tamara K” in German media. She practises alternative medicine, and urged protesters up the parliament stairs, claiming that US president Donald Trump had arrived in Berlin to liberate the Germans.

“These topics all somehow mash together through a belief that there are forces of evil and forces of good that must come to a final stand-off,” said Mr Rathje.

The woman at the Reichstag wore a shirt emblazoned with memes related to the QAnon conspiracy movement, which believes Mr Trump is fighting a satanic, deep-state cabal. Its following has grown among Germany’s coronavirus sceptics, Mr Dittrich said. He noted a spike in QAnon group membership on the texting platform Telegram, from some 20,000 before the coronavirus crisis to about 130,000. He said QAnon’s largest support base outside the English-speaking world was in Germany.

Pia Lamberty, a researcher on conspiracy theories at Gutenberg University Mainz, cited studies that show some 25 per cent of Germans believe in coronavirus conspiracies. And of these, a quarter believe the use of violence is justified in pursuit of their political aims.

Many of the protesters in Berlin waved the red, white, and black imperial-era German flag, normally brandished by the most extreme elements of the far-right. Officials worry the protests have become a far-right recruiting ground. Analysts say they are concerned less about the creation of new extremists than the prospect of far-right ideas spreading to other groups.

Radical rightwing groups have sensed this opportunity. Martin Sellner, the young Austrian leader of the Identitarian movement, who appeared at last Saturday’s demonstration, told followers in a video that the protests in Germany could show the wider population that they had a “common hidden goal”.

“With the corona movement, a mass of people can gather, organise, politicise, protest, and get a whiff of experience,” he said, arguing that the protests could mobilise a “broad, patriotic mass” to fight the “grand strategy” of global elites. 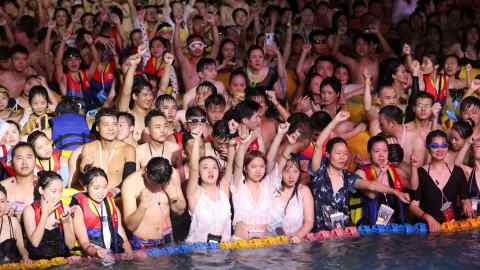 Many of these otherwise disparate groups also share a belief that they are living under a repressive regime. It is an idea that has been spread in recent years through social media, said Karolin Schwarz, author of Hate Warriors: The New Global Right-Wing Extremism. “They portray the German and other European governments as autocracies.”

Yet the paranoia characteristic of these groups means their alliances will always be shaky. Already, they are turning on each other. A vegan cookbook writer turned far-right propagandist repeatedly accused some protest organisers of being part of the Illuminati. Another organiser came under attack for distancing himself from the assault on the Reichstag.

But even if the protests crumble, experts argue, the discontent they exploit is likely to outlast them.

“They are articulating a certain broader dissatisfaction in society which I don’t think will fade away as quickly,” said Swen Hutter, of the Berlin Social Science Centre. “[It will] get stronger the more the economic and social fallout of the corona crisis materialises in Germany.”